This article is dedicated to one of the most fundamental processes in Spark - the shuffle. To understand what a shuffle actually is and when it occurs, we will firstly look at the Spark execution model from a higher level. Next, we will go on a journey inside the Spark core and explore how the core components work together to execute shuffles. Finally, we will elaborate on why shuffles are crucial for the performance of a Spark application.

Currently, there are three different implementations of shuffles in Spark, each with its own advantages and drawbacks. Therefore, there will be three follow-up articles, one on each of the shuffles. These articles will deep-dive into each of the implementations to elaborate on their principles and what performance implications they inherit.

In order to be able to fully understand this article you should have a basic understanding of the Spark execution model and the basic concepts: MapReduce, logical plan, physical plan, RDD, partitions, narrow dependency, wide dependency, stages, tasks, ShuffleMapStage and ResultStage.

Recab: What is a shuffle?

To understand when a shuffle occurs, we need to look at how Spark actually schedules workloads on a cluster: generally speaking, a shuffle occurs between every two stages. When the DAGScheduler generates the physical execution plan from our logical plan it pipelines together all RDDs into one stage that are connected by a narrow dependency. Consequently, it cuts the logical plan between all RDDs with wide dependencies. The final stage which produces the result is called the ResultStage. All other stages that are required for computing the ResultStage are called ShuffleMapStages. 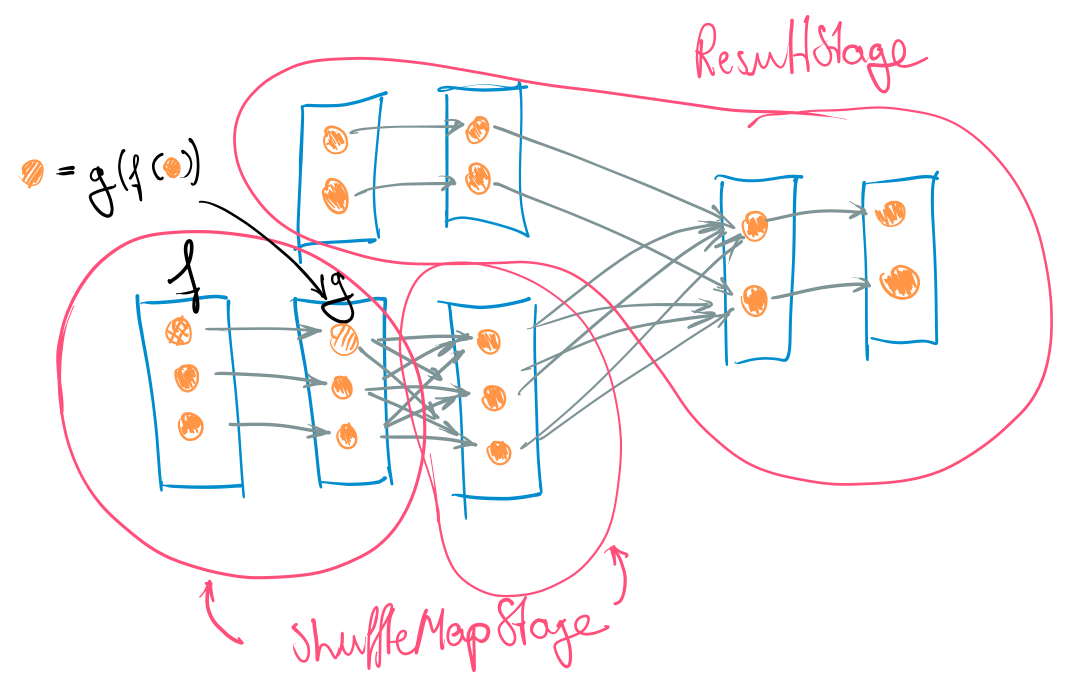 By the definition of a ShuffleMapStage (ending in a WideDependency) there must occur a redistribution of data before the subsequent stage can run. Hence, every stage has to end with a shuffle. Intuitively, we can think of the physical execution plan as a series of map steps (in the MapReduce paradigm) that exchange data according to some partitioning function.

What happens during a stage?

Once we start evaluating the physical plan, Spark scans backwards through the stages and recursively schedules missing stages which are required to calculate the final result. As every stage needs to provide data to subsequent ones, the result of a ShuffleMapStage is to create an output file. This output file is partitioned by the partitioning function and is used by downstream stages to fetch the required data. Therefore, the shuffle occurs as a implicit process which glues together the subsequent execution of tasks dependent stages.

When executing an action, the executors in our cluster do nothing different than executing tasks. This execution follows a general procedure for every tasks. Let's go through the execution of a single ShuffleMapTask on an executor:

How is a task executed?

The diagram shows the principal execution of a ShuffleMapTask and the most important components involved. By looking at the flow of execution the structure of a general task described above becomes very apparent: Within the runTask method the partition of the final RDD is evaluated by using its iterator over the records. This iterator internally uses the RDD's compute method which specifies how to compute the partition. For a ShuffledRDD for example, it accesses the BlockShuffleReader to read the required data. The BlockShuffleReader in turn encapsulates the distributiveness of the records of the partition and is responsible for accessing local and remote block stores to provide the requested records. The BlockShuffleReader uses the ShuffleBlockFetcherIterator which iteratively fetches blocks form the BlockManagers while obeying memory and count limits. The resulting iterator is directly passed to the ShuffleWriter.

The ShuffleWriter is the component we are going to look at in detail throughout this series of blog posts. Currently, there are three implementations of a shuffle writer each with its own upsides and drawbacks. Which one will be selected is mostly dependent on what kind of operation we want to execute and the configuration. The selection of the respective strategy is done within the only implementation of the ShuffleManager at the moment: the SortShuffleManager.

If we look at the execution of tasks from this perspective and realize that nothing else happens on executors than the three fundamental steps described above, it becomes obvious to see that these are the only three places where performance bottlenecks can occur. We also understand that basically all of these steps happen simultaneously on each executor and stress all of our resources:

However, it has been found that the main bottleneck in modern clusters is the CPU. This is because many tasks are CPU-bound and disks and networks in today's clusters provide decent throughput. Therefore, large efforts have been put into 'bringing Spark closer to bare metal' through project tungsten. One of the efforts made resulted in a shuffle strategy (an implementation of ShuffleWriter) called 'tungsten-sort'. Meaning, that performance and resource consumption of shuffles in general could differ significantly, dependent on what shuffle implementation is used.